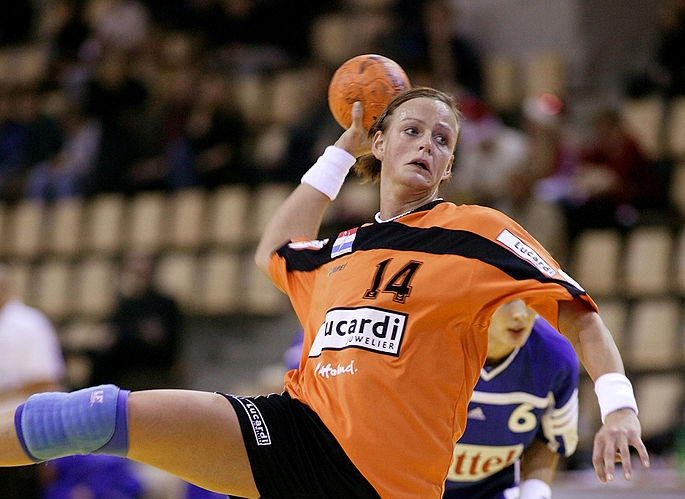 Olga Assink will be the assistant of Helle Thomsen coaching the Dutch Womens team until the European Championship in Sweden. The Dutch Handball Federation (NHV) found in Olga Assink a very expierenced former top player standing next to Helle Thomsen. The cooperation is established because Olga Assink and Saskia Mulder (they speak fluently Danisch because of their handball career in Denmark) have supported the NHV with getting the new coach acquainted with the job during the Holland Handball Tournament in Eindhoven.

Coach Helle Thomsen and technical director Sjors Röttger of the NHV are very pleased because Olga with all of her experience is an added value in the team, behind the team.

Olga Assink Olga Assink is one of the biggest handball players the Netherlands ever had. At her position as a pivot player, she was almost unstoppable. She has played over 200 matches with the national team and she always led the team in the fight.

Program preliminary round European Champsionship The Dutch Womens team play their first match of the European Championship at Sunday the 4th of December against Germany at 18:30. Two days later after a day rest, the team of coach Helle Thomsen will play their second match at 18.30 against Poland. The last match of the preliminary round is at Thursday the 8th of December against France at 20:45. The Dutch team play all their preliminary round matches in Kristianstad. The first three teams of their poule will go further to the main round. If the Dutch team qualifies itself for the main round, then they will play their next matches in Göteborg against the first three of group A with Sweden, Serbia, Spain and Slovenia. The European Championship will take place from 4th untill 18th of December in Sweden.

Preselection announced for the European Championship in Sweden!